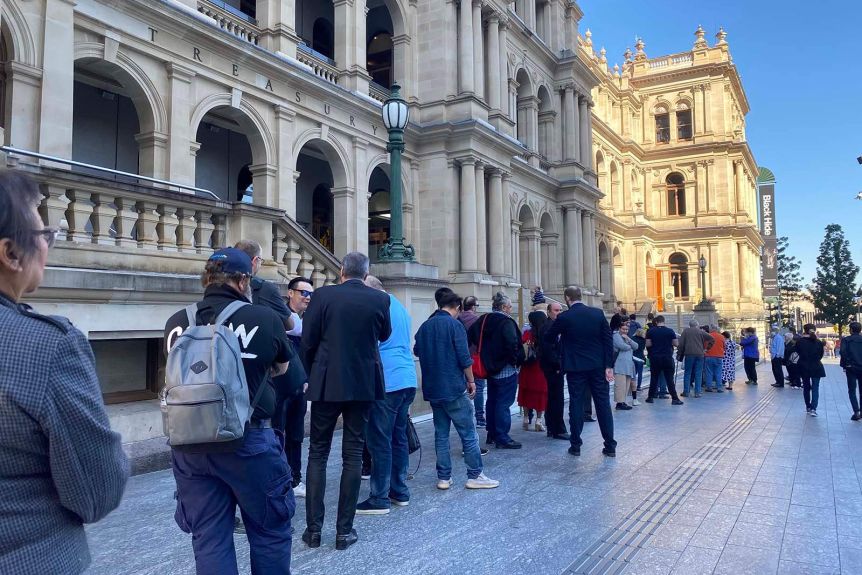 Queenslanders have wasted no time in flocking to recently reopened venues across the state after stage three of eased restrictions kicked in at midday.

Restrictions on a range of activities have eased sooner than expected, meaning larger parties, nightclubbing and community sport are, among other things, all officially back on the cards.

On the Gold Coast, cheers were heard from the Kurrawa Surf Club as the clock struck midday and management announced patrons were welcome to head to the bar to order a drink.

"What a great day for us to be properly opening up our pubs, clubs, restaurants and cafes," Mr Miles said.

"It's not every day as Health Minister you get to tell Queenslanders that it's a good day to go out and get on the beers.

"But today is a good day to get out [and] spend some money at your local pub."

Even the Premier was seen celebrating the relaxed restrictions over a glass of wine with her fellow Cabinet colleagues at the Paddo Tavern in Brisbane's west.

From today, larger venues are only capped at a capacity of one person per four square metres.

Casinos and other gaming venues have also been allowed to open with a COVID-Safe Plan.

Mike Ashton went to the Broncos Leagues Club earlier today and said it felt "totally different" to be back.

"It's going to be good to see a lot of old folk we know and start socialising again.

"I'm going to say hello to a few people, grab a drink, put some bets on the horses and have a punt on the machines."

Brook Baillie, executive chef at the Broncos Leagues Club, said staff were excited to return to the club after being out of work for months.

"The work-life balance has been pretty out of balance for the last three months, so hopefully we get some normality back," Mr Baillie said.

"I have never been this excited about coming to work.

"As long as everyone sticks to regulations and keeps their social distancing, we should get out of this.

"Hopefully come Christmas it will all be a distant memory."

Manager Joe Kelly said he was so excited at the prospect of welcoming punters back to the club, that he had a sleepless night.

"The members have been waiting 102 days to have a beer, have a coffee, have a flutter, so we can't wait."

Mr Kelly said the club lost millions of dollars in revenue during its three-month closure.

"We are talking three to five million in lost revenue … those are losses we are going to have to try and catch up with," he said.

"The bank has been fantastic and the JobKeeper program has kept our staff employed, but it will be a long road ahead."

Mr Kelly applauded the Premier for keeping the number of coronavirus cases under control.

Publican Les Pullos said it was a relief to be able to welcome greater numbers back into the Royal George Hotel in Brisbane's Fortitude Valley.

"It is good to have people walk up to the bar again and buy a drink — it feels like a real pub again," Mr Pullos said.

"We were closed for nearly 10 weeks, totally closed, and it cost us a large amount of money, but the JobKeeper scheme has helped.

"We have had some of the kids [young staff members] come in and do some painting and we've done all of the floors in all of the bars, so we did things we couldn't do while the place was trading."