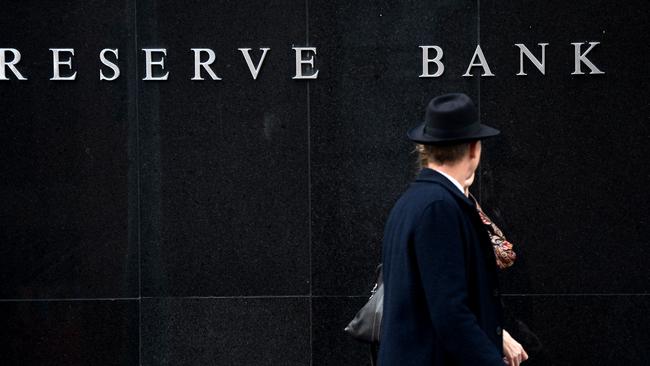 Looking down the barrel at zero per cent interest rates

These are strange days indeed: Interest rates are about to cut again — yes, they can still slice them down a teeny bit more — and the end result will be that money in the bank is officially useless as far as saving or investing is concerned.

A very likely cut on Melbourne Cup day changing official rates from 0.25 to 0.10 per cent will mean we have come to the end of the line.

It also means that for the first time ever Australian banks are going to have to weigh up whether you should be paid anything at all for depositing with them.

There is no rule that says banks have to pay anything for holding your money. In fact, the taboo was broken earlier this week when neobank Xinja wrote to its customers telling them that for amounts over $150,000 there would no longer be any interest whatsoever paid.

As Steve Mickenbecker, group executive at the rate comparison agency Canstar, puts it: “The savings market is looking down the barrel at 0 per cent interest rates, these moves by the neobanks will be a good test of peoples’ reaction to it’

Indeed, people are already taking action: In the same speech from Philip Lowe, governor of the Reserve Bank of Australia, which hinted at another rate cut came the odd piece of news that although cash now only represents about one quarter of all financial transactions, the bank was pumping out extra volumes of $100 bills.

The printing of high denomination notes is running at triple the usual rate and this money is not being used to buy groceries!

Instead some Australians are stuffing safe deposits full of cash in order to … well, who knows? In order to have money outside the banking system, in order to evade the pension means test, in order to pay the plumber in cash?

The essential point here is that the potential cost of having money in a box or up the chimney has been removed if interest rates are paying virtually nothing: Under such circumstances your are not missing out on any income if you take the money out.

The dash for cash is the application of the principle at its most basic, but the same thinking is influencing changes right across the investment spectrum.

Just about every financial adviser in Australia is facing the same question from frustrated investors: ‘How am I supposed to make anything on savings if interest rates are zero? ‘

In response, many advisers are recommending investments they would never have gone near in times past.

For example leading advisers are now recommending gold as an alternative to cash. More often than not the recommendation is for exchange traded products based on gold rather than gold bars or bullion.

The logic here is that at least with gold there is the prospect of capital appreciation. As the investment manager at the Perth Mint, Jordan Eliseo, points out: Australian investors have enjoyed an average 8 per cent increase in the yellow metal every year for the past two decades.

What’s more, the old refrain that gold is no good because it does not pay income has no sway because … hey, cash doesn‘t pay any income either!

But the real answer on where you might get good returns ‘risk free’ is simple- there is nowhere to put your money earning a good return without risk.

Certainly not cash, and for those who suggest government bonds — well, of course, we don’t expect the government to default on them and if you think money held for three years at near 0.25 per cent is worth the commitment then off you go.

For many who have a distinct target for their existing savings — such as a home deposit — moving money out of cash into anything else will often be much too risky in the short term. The safest thing to do is not take any risk at least that way the principal saved remains intact: If there has been no interest paid this group will just have to suck it up — the trade off is that their future mortgage rate will be as low as we have ever seen.

But for retirees the territory is more treacherous: It demands they put a foot on the risk ladder without stepping on speculative schemes sold as ‘income opportunities’.

For this group there is little choice except to venture forth into Exchange Traded Funds, more blue chip shares and even gold for the simple reason that as far as returns go, anything is going to be better than cash.