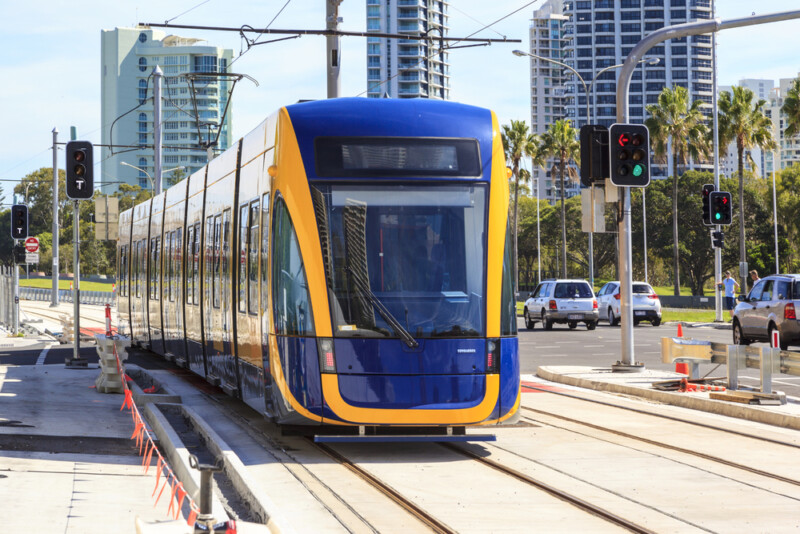 The Queensland Government and the City of Gold Coast have committed to begin the business case for the jointly-funded light rail link to the Gold Coast Airport.

Future east-west bus and light rail connections will also be explored with a study to prioritise rapid transit options on the Broadbeach-Robina and Broadbeach-Nerang corridors.

Queensland Premier, Annastacia Palaszczuk, announced the $7 million deal, which would be funded under a 50/50 partnership between the state and council.

“This business case will support the next critical steps needed to push major transport investments on the Gold Coast forward which is vital for Queensland’s economic recovery,” Ms Palaszczuk said.

“This is about building a pipeline of projects that can continue to support and create jobs, boost our economy and improve transport for locals, particularly those living on the southern end of the Gold Coast.”

Ms Palaszczuk said the global pandemic impacted economies around the world, including Queensland.

“But it’s because we’re continuing to manage the health response that we’re able to focus on Queensland’s economic recovery plan,” Ms Palaszczuk said.

“At the heart of that plan is a $50 billion guarantee to invest in large infrastructure projects that will support and sustain jobs for Queenslanders for years to come.

“We’re already doing that on the Gold Coast with the $1 billion M1 upgrade between Varsity Lakes to Tugun underway now – supporting almost 850 jobs – and we’re nearly ready to award the contract to build the next stage of Gold Coast Light Rail from Broadbeach to Burleigh, creating 760 jobs.

“I want to thank Mayor Tom Tate for his continued support for light rail, this partnership funding means we can now start planning for the 13km corridor from Burleigh Heads to Coolangatta.”

“I thank the Queensland Government for their commitment to this business case.

“The entire light rail project is an example of the great things that can be delivered when all three levels of government work together collaboratively and I expect Stage 4 to prove that once again.

“Ideally, we will finish Stage 3 and immediately break ground on Stage 4.”

Queensland Transport and Main Roads Minister, Mark Bailey, said the partnership with Council had been critical for supporting light rail on the Gold Coast.

“Much like its famous beaches and surfside towers, the iconic blue and yellow trams are now inextricably linked with the Gold Coast’s identity.

“Locals and visitors love light rail, and our government has backed each new stage thanks to the support we’ve received from the City of Gold Coast.

“It was Labor that got light rail started on the Gold Coast, and we built Stage 2 in record time for the Commonwealth Games.

“We’re underway with Stage 3, and now we’re moving forward with plans for Stage 4 and beyond.”

Member for Gaven, Meaghan Scanlon, said work would start in 2020 on the $5 million light rail Stage 4 (previously known as Stage 3B) business case, as well as on the $2 million east-west transport corridors study.

“The study into those key east-west road corridors will determine short and long-term options to improve public transport, including rapid bus services and whether they can accommodate future spur lines for light rail,” Ms Scanlon said.

“Building light rail is a priority, but we also need to plan for the future of public transport on these key east-west arterial routes.”

Ms Scanlon said the east-west transport study would assess the potential for light rail to connect to Metricon Stadium and look at locations for infrastructure such as bus stops and stations, electric vehicle charging requirements and depot infrastructure along those corridors.

“With work rapidly progressing on Stage 1 of the Coomera Connector, which will connect to Nerang Broadbeach Road near Metricon Stadium, this is the ideal time to be putting plans in place for future public transport,” Ms Scanlon said.

The transport planning partnership comes as the results of an independent survey revealed community support for the Stage 4 light rail alignment sticking to the Gold Coast Highway instead of going west to use up the heavy rail corridor.

Mr Bailey said the survey of southern Gold Coast residents and businesses conducted in March and April 2020 showed a clear preference for light rail to run along the highway between Burleigh and Tugun.

”The survey revealed 58 per cent of respondents backed the light rail extension from Burleigh Heads to Tugun compared to 25 per cent who preferred bus lanes,” Mr Bailey said.

”The resounding message from many residents was that taking this approach would result in improved walking and cycling paths, reduced traffic congestion and a faster and easier journey for commuters.

“The community understands the importance of preserving the option of future heavy rail to the airport, with 87 per cent of people in this survey backing that option.

“We’re planning for a future light rail extension that actually takes locals and tourists where they want to go – to the beach, dining and retail centres, and beachside accommodation, as well as connecting them to the airport.”