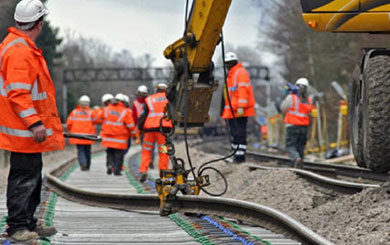 Prime Minister Scott Morrison has today pledged to drastically cut Commonwealth assessment and environmental approval times on projects, with at least $72 billion worth of priority works set to be fast-tracked across the nation.

Addressing the Committee for Economic Development of Australia (CEDA) this morning, the PM highlighted key aspects of a five-year JobMaker plan that "charts the way forward for a new generation of economic success".

He said 15 major projects had been identified for fast-tracked approvals under a bilateral model between the Commonwealth, States and Territories, with around 66,000 direct and indirect jobs to be created.

"This investment, and most importantly these jobs, will be brought to market earlier by targeting a 50 per cent reduction in Commonwealth assessment and approval times for major projects from an average of 3.5 years to 21 months," the PM said.

"This priority list includes the inland rail from Melbourne to Brisbane, the Marinus Link between Tasmania and Victoria, Olympic Dam extension in in South Australia, emergency town water projects in New South Wales, and road, rail and iron ore projects in Western Australia.

"Early examples of this approach are already paying dividends and are very encouraging. I commend the New South Wales government who we've been working with and we are on track to complete Commonwealth assessment and approval for the Snowy 2.0 project in under two years, unlocking over 2,000 regional jobs."

"According to departmental estimates, delays associated with these approvals alone cost industry over $300 million just in 2019 - that's not good," Morrison said.

"The Commonwealth has already taken steps to cut project approval times under the EPBC Act, and at the end of 2019 approval decisions took 90 days on average. Today they take 40; that is what we've achieved this year in 2020.

"Our goal is to cut these times by a further 25 per cent by the end of this year, getting down to 30 [days] for major projects," he said, adding the National Cabinet has been working on how to streamline Commonwealth and State process for "point of single-touch" approvals.

In terms of new spending, the Prime Minister outlined $1.5 billion would go towards immediately starting small priority projects that have been identified by states and territories.

"As part of this package $1 billion will be allocated to priority projects which are shovel-ready smaller projects - they're ready to go - with $500 million reserved specifically to target road safety works," he said.

"This is an important opportunity to make our roads safer across the country, not just in rural areas where it is critically important, but also in other parts of the country."

Once this support is finalised the government expects to have either brought forward or provided additional funding to some $9.3 billion in infrastructure investment in the past eight months, building a pipeline of future projects.

The PM also announced the Deregulation Taskforce established last year would be brought into his department of the Prime Minister and Cabinet as part of the JobMaker agenda.

"This [taskforce] has already included simplifying business registers, streamlining export documentation, and making it easier for a sole trader and micro business to employ people; in most cases their first ever employee," he said.

"The next phase of the taskforce work will zero in on areas to assist COVID-19 economic recovery, so for example occupational licensing and registration requirements often vary across states and territories, which increases costs on businesses and workers who operate or move across Australia.

"Greater mutual recognition of qualifications and improved information flows between jurisdictions will be vital to allow Australians to take up to opportunities in coming months."

Morrison added COVID-19 had shown the country's laws have not kept pace with digital technology when it comes to business communication.

"For example, by requiring businesses to use paper for storing information instead of using electronic delivery or adopting new technologies like blockchain; these laws too are ripe for modernisation.

"This crisis has shown what can be achieved when regulators are pragmatic and responsive, solving problems without compromising safeguards.

"Australia is opening up again"

The PM referenced consumer confidence indices from both Westpac and ANZ that show lost ground has been recovered, and high frequency spending data shows this has been increasingly translated into increased retail sales.

But the harsh reality is that around 1.6 million in Australians are now on JobSeeker, and around half of these people have started accessing these payments over the past few months.

"Many have done it for the first time in their lives," the Prime Minister said.

"It has been young people who have had the greatest increase in the demand for JobSeeker; this is also true when you include those still employed but working zero hours.

"We know there is a disproportionate impact on women and younger Australians and those with lower skills attainment."

In accommodation, hospitality and retail more than 600,000 Australians have either lost their job or are working zero hours, while national household consumption of services figures are expected to get worse in the June quarter as so many businesses were shut down or remained idle.

"We're aspirational and we're a positive people, and the good news is we are now coming back. Australia is opening up again," he said.

"While trailing the improvement in consumer sentiment, business confidence and conditions are also clawing their way back; the easing of restrictions and Australians emerging from isolation confident in the health measures taken by governments, will continue to drive up demand and indicate to businesses that they can once again open their doors and make a go of it.

"It's not just enough for businesses to be able to be open - they've got to have confidence to open, to bring the staff back, to get the orders in for their inventories; you have to put the investments in, including through the instant asset write-off which the Treasury extended out till the end of the year."

He said while global growth forecasts were "weak and bleak", the outlook for Australia's major trading partners was much stronger.

"Our mining sector has also been able to keep on running. Export volumes and prices are encouraging...and will provide much needed income for the country, and the same is true for many other export sectors," he said.

The PM noted Australia had been able to get the balance right between health and economic priorities in comparison to other nations.

"Whereas other countries imposed strict lockdowns, we've been able to keep large sectors of our economy open and functioning, including construction, manufacturing, agriculture, mining, as well as large parts of the retail sector which were not closed," he said.

"The recent national accounts show that the Australian economy shrunk by 0.3 per cent in the March quarter. Now, while the damage to the economy is heartbreaking at that level, it has been far less than so many countries.

"Looking forward, Australia is expected to have the third lowest fall in GDP in 2020 of all economies surveyed by the OECD. But the hit to our economy, we must understand, is significant despite our relatively stronger performance and the road ahead will be very hard. There is a mountain yet to climb."

It is expected that more than $100 billion of economic activity has been lost as a result of this crisis, and that it will take the country at least two years to get back to the level it was at prior to COVID-19.

"That's why we have a plan to lift that growth not just for the next few months, just not for now, but the next five years.

"We need to lift our economic growth rate by more than one percentage point above trend, to beat the expected pre-COVID-19 GDP position by 2025, to catch back up to where we were before COVID hit. The restoration of growth is also critical to our public finances."